Flutter Vs Swift: Which One is Best for iPhone App Development? 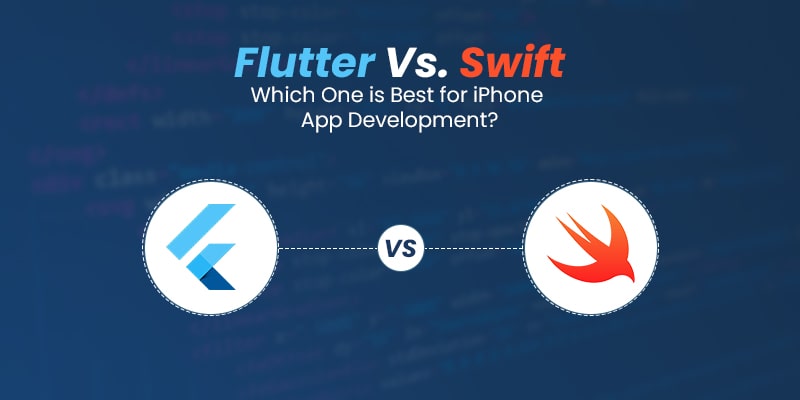 Today, businesses most commonly use Flutter and Swift to develop iOS apps. And everybody demands to learn which technology is excellent for writing code and developing high-quality, user-friendly iOS apps. But there is no straight answer to the question “Which technologies are excellent for your app? The reason? It’s because each programming language has unique features and functionalities.

The main focus is to deliver apps that are fast, are engaging, look attractive, and offer everything a user needs. In this post, we’ll evaluate the differences between Flutter App Development and Swift so that you can pick the best framework for your iOS app development. Let’s dig out.

Apple released Swift in 2014 which is its cross-platform, compiled programming language. It is a general-purpose language developed uniquely for native iOS development. The framework Swift offers advantages including:

Flutter app development, developed by Google, is a multi-platform SDK. It utilizes the “Dart programming” language, and enables you to develop Android, iOS, Windows, Linux, Google Fuchsia, Mac and web apps via the same source code. You can anytime hire Flutter app Developers to get the high-end services. Flutter benefits include:

Because Swift is a natively developed language, you won’t have any trouble integrating any native iOS functionality into your interface. The user experience will be exactly similar to that of iOS. So, you’ll have to develop each feature from the beginning. Even the user interface must be built from the ground up.

Flutter provides many UI elements to experiment with. For example, you can hire iOS app developers and begin with Basic and Cupertino widgets. There won’t be any support requirements from Swift. From the user’s perspective, the UI developed with Flutter will be unrecognizable from that created with Swift. There would be no variations because the entire UI will be identical.

iOS app developers often make code changes in iOS app development. They test the code on a simulator and a device. This process is known as app reloading, and it is essential in mobile app design.

In Swift, to change the button’s name, you must rename the interface from the storyboard. There may also be accessibility and data changes that need to be made. To verify whether the changes were visible on the simulator or device, you will need to rebuild the application. This procedure in Xcode takes 7-12 seconds.

Flutter’s Hot Reload function allows you to modify apps and reload them according to your convenience. Changes take effect immediately on the simulator.

Then modify the text in “Raised Button” to “Click Me”. Thereafter, reload your application. The whole process can be completed in less than 3 seconds using Flutter’s app building platform. Just make sure you hire iOS app developers from a reputable company.

All the iPhone app development services must be tested for potential bugs before being released to the public.
Swift offers an XCTest framework to native iOS mobile applications that includes a process for integration, UI testing, and performance. Apple updates these tools regularly as part of the iOS app developer package. Developers will need to address the limitations of data-driven testing, snapshot tests, and grouping of tests.

Flutter Driver is used to run app testing from the UI level up to the functional or module testing level. Widget testing helps developers create bug-free codes right from the beginning. It provides a quick documentation process that allows for the development of mobile applications across all platforms.

Swift is a native iOS language that allows for app development. This has serious advantages. It is possible to expect better performance in mundane tasks that require large computational power like games and Real-time Chat apps. Swift is an excellent choice when you want to get the most out of the platform.

Flutter app development cannot be left behind. Dart employs the concept of a garbage collection system. It’s also precompiled, which allows for quicker and more efficient communication with each specific smartphone device. When it comes to the iOS platform, Flutter works excellently like Native Swift. Just contact an iPhone app development Company for iOS app development services and discuss the performance of both the platforms to squeeze out the maximum benefits.

Flutter vs Swift: Community and Support

Swift.ORG is the Swift platform and its community revolves around it. The statistics illustrate that there are nearly 2600 active users and over 830 contributors. Stack Overflow, the most popular code- and query-exchange platform, has about 230 000 questions tagged with SWIFT.
Flutter app development provides excellent insight, even if the numbers are not shown. We looked at 3400 Flutter-related questions and the number of questions tagged Flutter is below 70 thousand. So, ultimately, there are fewer issues with Flutter than it seems. The entire Flutter community monitors many forums like Google groups, and Slack. Flutter is more open-source which makes it more user-friendly.

Examples of Swift and Flutter-based Apps

If the comparison above is not enough to help you make a decision. Let’s now see how the business uses each platform. These apps are used by large and small companies alike.

Firefox for iOS is a Mozilla web browser that uses the native iOS language due to safety concerns.
Asana is a SaaS-based project management platform for web and mobile devices.
Lyft – It’s an international company that offers mobile apps for vehicle rental, bike-sharing, and food delivery.

Realtor.com – Some say it’s America’s largest real estate site that uses innovative marketing strategies.
Google Ads – It’s obvious that Google also uses its product. Ads is an internet advertising platform that provides a variety of services.
Philips Hue – With this app, you can control smart lights in your home according to your media. It can be used to adjust lighting according to your mood.

So? Which is suitable for you, Swift or Flutter App Development? Doesn’t matter how many differences, features, or benefits we provide, each platform fits different needs and businesses. Both technologies are used by many well-known startups and businesses. However, deciding which one for your iOS application depends on your industry type and requirements.